In this project we read and discussed the book "Fahrenheit 451", made an art piece in response to the book, and wrote either a historical/literary analysis or a fiction piece based off of the book. We exhibited our art pieces on March 11th at the Powerhouse Science Center. 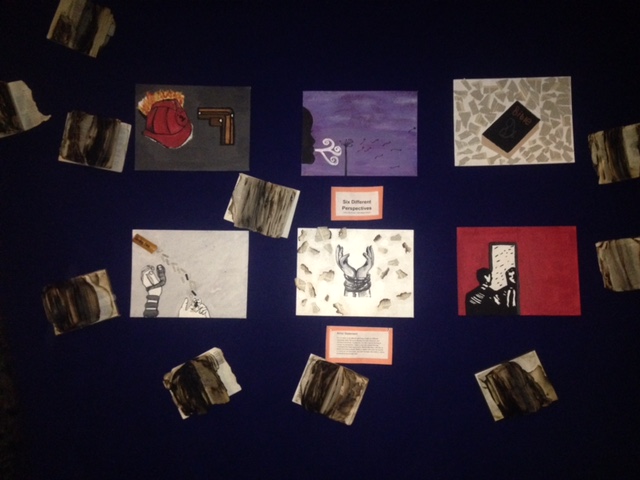 Our art piece is six different paintings of each six different characters within the book, Montag the main character who changed everything, Clarisse the one who inspired Montag to change his perspective, Faber a man who helped Montag understand the meaning of books, Mildred Montag's wife who is awake but always asleep, Beatty a captain who sees the beauty in books but can not read them, and then Granger who leads a  group of people to a promised land.

-------------------------------------------------------------------------------------------------------------------------------------------------
The book Fahrenheit 451 was written by Ray Bradbury; in his book he has predicted many of our societies falls ten years in advance. In the book he introduces the readers to a futuristic world based entirely off of progress and technology. In this world he has created the main characters Clarice,Montag,Faber, and Mildred must fight a world that is overpopulated and now under control over the population through censorship. However when someone resists the ways if their world they are misunderstood and must face punishment.
The plot line Bradbury created shows the world as if it was normal and as we read along the characters slowly become aware of their world’s flaws. Throughout this process these characters goes through many changes and struggles until they can truly see the way their world is faulty. Ray Bradbury uses his character Montag to introduce their society’s norms.  This book may seem as though it is just based off of predictions of our world's future but it come down to the question of what brought Ray Bradbury to write this book.
Ray Bradbury was born during the golden era. He grew up in the time where things were changing which was the time of popular cultural advancement. Ray Bradbury was born in Waukegan, Illinois on August 22, 1920. He spent majority of his childhood there. In 1934 the family moved to Los Angeles . On the way they were on the search for the series of the Oz books. Ray found a passion for books but with this interest he learned that he was not alone. He later joined a book club which helped his interest grow day by day. Eventually he entered a story into a magazine which was later published, this was the start of his writing. After many stories and books he came to the point where wrote his book.
Ray Bradbury has showed to put deep meaning behind everything in his books. He was born into this time of chaos, destruction and change. There was no normal day in his childhood; something was always different in his day. When he came to writing he was able to tie in these events and tragedies in his work based off his personal experiences.  He was just a small author who rose to his fame through connection. People loved his writing at that time because they were able to build these personal relations to his writing. When he was interviewed on the inspiration behind his book Fahrenheit 451 and sled about the inspiration behind his book he said “Well, Hitler of course. When I was fifteen, he burnt the books in the streets of Berlin. Then along the way I learned about the libraries in Alexandria burning five thousand years ago. That grieved my soul. Since I'm self-educated, that means my educators—the libraries—are in danger. And if it could happen in Alexandria, if it could happen in Berlin, maybe it could happen somewhere up ahead, and my heroes would be killed.”
The idea of burning books came from leadership and power. This action became popular and well renowned after it symbolised as demagoguery, censorship, and suppression. Hitler used this as a way to make people feel under control and of lower power. To me a book means free thought and free will. By burning books it takes that away it takes creativity and alternative to the present. A book can destroy mind control so they must destroy the only thing that can destroy them.  When Hitler did this it created almost this virus of anxiety and fear that spread around the communities. This “virus: took control over all the people Ray Bradbury followed the common trend of authors movie producers and artists putting this symbolic idea into their work. This symbol was carried out into many different time periods and Ray Bradbury brought it back into our culture as a way of warning and reoccurrence. Ray Bradbury died in 1953 but his legacy did not die with him. This books meaning and predictions have carried with us year after year as things he wrote about become more realistic as our generations evolve. He left a huge mark into our society and his thoughts continue to inspire people all around.
In a way Bradbury was expressing the idea that Chaos, War, and destruction can cause social stability. He represents this idea in many part of the book. His proposal was that you maintain a social struction of power by war - keeping the population hiding in fear of an enemy attack, whether the enemy is real or not. However, in order for this to be achieved the leader must remain the same because this could lead to fail in the mass majority of the system. In the book he expresses this by making the population fall under the idea of his or her experience; something they have not yet faced. They say that the things are the way they are due to their experience or a “story” that may or may not be real. This makes people want to believe them due to fear of more disaster. This idea was proposed by ray Bradbury to show how little of a thing can ruin a society. It is all based around personal freedom. The relation to WW2, Censorship, and Fear all revolve around individual thought, expression and character. Without this capability we can’t form opinions of our own and must conform to the mass idea. Bradbury expresses the consequences when someone is not given the “right”  to express his ideas or keep his memories. Through Clarisse and many other characters he showed us the result of what happens when humans aren't allowed to fully express their individuality and choice (they die). He used the characters Montag, Faber, and Granger, to show how things can change once the opportunity to recognise the importance of his/her individual past, as being able to fight for their world.
Bibliography:
------------------------------------------------------------------------------
-"FAHRENHEIT 451 Ray Bradbury." SparkNotes . SparkNotes, n.d. Web. 09 Mar.
2016.